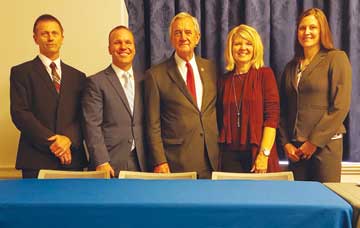 CHI St. Gabriel’s staff went to Washington, D.C., to brief officials on how they’ve responded to the opioid epidemic sweeping across the country.

Since receiving a grant from the state of Minnesota to tackle the issue three years ago, CHI St. Gabriel’s has lowered the amount of opioids being prescribed in the area by 23 percent and moved pain from being the number one reason people visited the emergency room to outside the top 20 list.KonectDirect – Advertise Smarter

CHI St. Gabriel’s President Lee Boyles said the hospital is trying to show others across the nation the model it uses to deal with the opioid issue so communities don’t have to reinvent the wheel.

The hospital has seen a number of patients addicted to opioids like pain medication and even heroin get treatment and become normal members of the community again, he said.

“We have so many success stories of patients now being able to hold jobs and their families aren’t falling apart and they’re leading normal lives,” Boyles said.

One of the ways the hospital is working to reduce the amount of pain medication being prescribed, is by trying to find permanent solutions to patients’ pain issues, whether it be through physical therapy, surgery or something else, Boyles said.

Throughout that process, he said the hospital will work to taper off a patient’s prescription, rather than cutting them off cold turkey.

Another issue the hospital worked on was to deal with the diversion of drugs from patients who didn’t need them and chose to sell the drugs.

“It’s a massive savings in life and dollars,” Nolan said.

The hospital is part of Minnesota’s legacy in leading the way in medical issues, Nolan said.

The invitation for representatives from CHI St. Gabriel’s to speak to the Senate and the House of Representatives came from Sen. Al Franken, D-Minn, and Nolan.

Staff from the hospital spent Wednesday in briefings with Nolan and Franken, informing members of the House of Representatives and the Senate, or their staffers.

In a statement, Franken said the work the hospital is doing is something great and he wanted to share what they were doing with his colleagues in the Senate.

Working with other agencies in Morrison County, from local law enforcement to the county’s Public Health and Social Services departments has been crucial to success, Boyles said.

Hospitals across the nation will be judged not by just how they heal people in their buildings, but what they do outside of it, Boyles said.

Many of the people working at CHI St. Gabriel’s live and have families in Little Falls, so keeping opioids off the street is something they personally want to see, not just as medical providers, but as members of the community, Boyles said.

This website uses cookies to improve your experience while you navigate through the website. Out of these, the cookies that are categorized as necessary are stored on your browser as they are essential for the working of basic functionalities of the website. We also use third-party cookies that help us analyze and understand how you use this website. These cookies will be stored in your browser only with your consent. You also have the option to opt-out of these cookies. But opting out of some of these cookies may affect your browsing experience.
Necessary Always Enabled
Necessary cookies are absolutely essential for the website to function properly. This category only includes cookies that ensures basic functionalities and security features of the website. These cookies do not store any personal information.
Non-necessary
Any cookies that may not be particularly necessary for the website to function and is used specifically to collect user personal data via analytics, ads, other embedded contents are termed as non-necessary cookies. It is mandatory to procure user consent prior to running these cookies on your website.
SAVE & ACCEPT