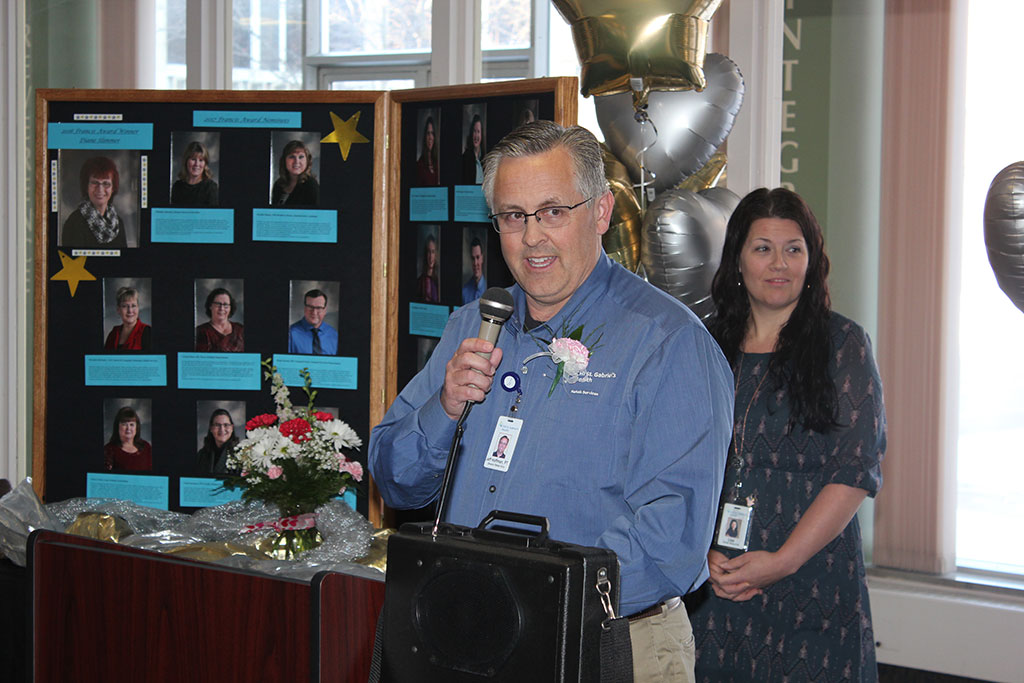 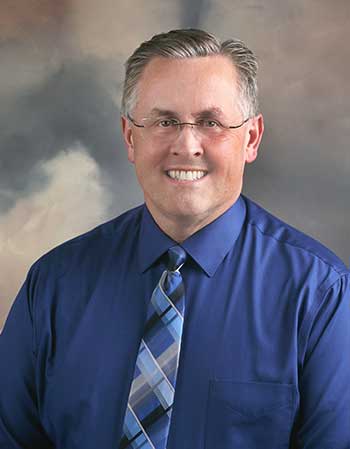 The director of rehab services at CHI St. Gabriel’s Health, Jeff Hoffman, PT, was chosen for the 2017 Francis Award at the organization’s celebration luncheon held February 13, 2018, in the hospital cafeteria.

The award is presented each year to a CHI St. Gabriel’s employee “who goes beyond the call of duty, serving the community and the organization with heart and hands.”  It recognizes employees for the way they exemplify the organization’s mission, vision, values and behavior standards as well as their commitment to the community and the organization.  CHI St. Gabriel’s Health includes approximately 500 employees of St. Gabriel’s Hospital, Family Medical Center, Little Falls Orthopedics, Alverna Apartments and CHI Health at Home, as well as Family Medical Center’s satellite clinics in Pierz and Randall.

Hoffman, a physical therapist and director of the rehab services department, joined CHI St. Gabriel’s Health on June 30, 2000.  His nomination related how he is an educator who readily shares his knowledge and expertise regarding rehab with others.  The nomination specifically noted his integrity and how he exemplifies the behavior standard, PAR (praise, acknowledge, recognize) for the Course.  He has worked hard to create a work environment where praise and recognition is commonly shared among the staff.

“Jeff exemplifies our core values of reverence, integrity, compassion and excellence in his daily work,” Zupko says, adding, “He is a wonderful example of living out our mission in servant leadership.”

She continues: “Jeff is patient, kind and trustworthy.  He mentors other leaders and is so willing to share his knowledge and expertise to change things for the betterment of patients and staff.  He is always willing to listen with an open mind, to help out wherever he can and he always follows up. We are very fortunate to have him as one of the leaders in our organization.”

Hoffman says receiving the Francis Award is quite an honor, but it also makes him a little uncomfortable.  “The first thing I thought about when my name was called is that out of the 18 nominees, there were others who are more deserving,” he says.  “I thought how can this be?”

Zupko says Hoffman’s humility is readily apparent, “When praising Jeff for a job well done, he always says ‘it wasn’t me, it was the staff.’ He includes them in projects, is often seen thanking them and letting them know that he appreciates all the work that they do.”

Hoffman says his leadership style has evolved over the past 18 years at CHI St. Gabriel’s.

“I’ve learned a great deal in my tenure at St. Gabriel’s,” he says.  “Some of my department’s culture assessments pointed to improvements that needed to be made.  I saw that in being honest with myself, I needed to change the way I interacted with my staff in order to build trust and create a positive working environment.  This change was critical to enhancing the culture in our department.

Hoffman was successful in building that trust thanks, in large part, by focusing on key culture goals.

“We concentrated on building key attributes like collaboration, communication, conflict management, and engagement and the trusting relationships followed.  It’s been very rewarding to see how our department has grown into a more trusting and cohesive team.”

Zupko says Hoffman reflects the Peace Prayer of St. Francis of Assisi. “Jeff is a calming presence,” she says. “He never gets angry and speaks only nice things about people.  He’s quick to forgive and truly seeks to understand issues. I feel that he embodies the spirit of the St. Francis of Assisi and was a great selection.”

This website uses cookies to improve your experience while you navigate through the website. Out of these, the cookies that are categorized as necessary are stored on your browser as they are essential for the working of basic functionalities of the website. We also use third-party cookies that help us analyze and understand how you use this website. These cookies will be stored in your browser only with your consent. You also have the option to opt-out of these cookies. But opting out of some of these cookies may affect your browsing experience.
Necessary Always Enabled
Necessary cookies are absolutely essential for the website to function properly. This category only includes cookies that ensures basic functionalities and security features of the website. These cookies do not store any personal information.
Non-necessary
Any cookies that may not be particularly necessary for the website to function and is used specifically to collect user personal data via analytics, ads, other embedded contents are termed as non-necessary cookies. It is mandatory to procure user consent prior to running these cookies on your website.
SAVE & ACCEPT